How to identify and manage Black Medic, a common lawn weed that resembles clover and is often confused with it. Photos are included to help with weed id.

Resembling, and often confused with clover, it is easily identified by its bright yellow flowers and leaf arrangement. Take a close look at the leaflets, you'll notice that the middle leaflet has a short stalk, while the lateral leaflets are attached close to the petiole.

Like clover, black medic is a legume and has the ability to capture nitrogen from the atmosphere and convert it into a form usable to plants.

Life Cycle: Yellow trefoil is a summer annual that usually sprouts from seed in the spring - sometimes a winter annual, sprouting in the fall and living through the winter. Young plants start to flower six weeks after they sprout. Plants that germinate in mid-summer will not flower until the following year - if they survive the winter.

This weed starts to appear as the weather gets hot and dry in the summer. Look for it in lawns under stress from compaction, heat and drought. It's easily spotted along roadsides, trailing over the curb in July and August. 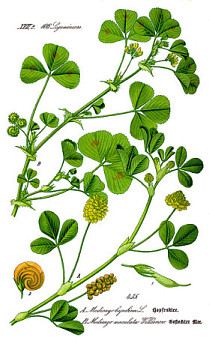 Cultural control: Some annual weeds can be controlled by mowing, yellow trefoil tolerates mowing because of its low growing habit. Reduce compacted soils by aerating at least once a year and then follow that up by overseeding to fill in bare and thin areas.

Chemical control: Use a pre-emergent herbicide in the spring to prevent weed seed germination. Pre-emergents are especially effective in areas were black medic was a problem the previous year.

Broadleaf herbicides work best when applied in early spring or fall when the plant is young and actively growing. Products that contain 2,4-D, MCPP, dicamba, clopyralid or triclopyr as an active ingredient can successfully control the plant and work better than 2,4-D applied alone.

Glyphosate (roundup) is non-selective and can also be used to kill yellow trefoil in landscape beds, and along curbs, sidewalks and driveways.

Vinegar-based (20% acetic acid) and Citric Acid herbicides are considered a natural organic weed killer. They can be used as a non-selective herbicide in place of glyphosate and will kill annual weeds.

Stems: The prostrate stems are angled, slender and hairy. They branch and spread along the ground from the taproot.

Leaves: Green, compound leaves with three oval-shaped leaflets up to 1/2 inch long, arranged alternate along the stem. The leaflets have toothed margins and a small point on the tip. The center leaflet is on a short stalk, while the lateral leaflets are attached to the petiole.

Flowers: Small, round, bright yellow flowers in clusters that are about 1/2 inch long.

Fruit: Tiny pods that turn black when ripe. One seed is produced per pod. The seeds look like little brown kidney beans.